Kingspan has been ordered to halt sales of certain batches of its Kooltherm K15 product after they were initially found to meet a lower fire safety performance rating than advertised. 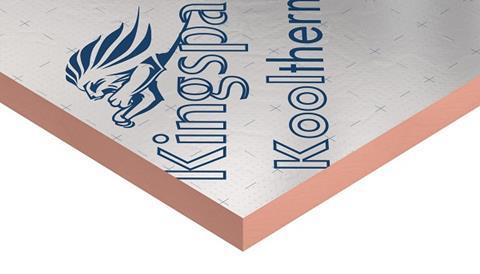 The insulation manufacturer was issued with prohibition notices by the Office for Product Safety and Standards (OPSS) on 23 December to stop the supply of K15 products and recall them, after the company itself alerted regulators to the problem on 25 October. The order applies to Kooltherm K15 products manufactured between 1 August and 18 October last year with an estimated sales value of £150,000.

In a statement, Kingspan said the batches of K-15 were initially found to achieve Euroclass D fire safety performance level rather than the more stringent Euroclass C as advertised, when tested by Kingspan and OPSS on small scale.

It said: “However, subsequent Single Burning Item tests of the same batches of K15, commissioned by Kingspan in accredited independent laboratories, achieved Euroclass C, consistent with the product’s Declaration of Performance (DOP).

“Given that the batches concerned also achieved C classifications in more stringent large-scale ISO 9705 tests, Kingspan is confident that there is no product safety issue.”

OPSS also found that Kingspan did not have a valid declaration of performance procedure and issued a further order recalling the batches of product.

A spokesperson for Kingspan said: “While Kingspan believes it met the appropriate guidance, we are in the process of completing a new DOP to satisfy the OPSS’s requirements. We are very confident we will meet these requirements, and pending approval from the OPSS, we expect to resume distribution of K15 in quarter one 2022.”

The orders mean Kingspan has had to contact any person supplied with the affected products and arrange for them to be returned. It only applies to insulation that has not been already been installed on buildings.

A spokesperson for Kingspan said it had taken “swift action” to return the batches. It said: “K15 is delivered directly to specialist installers on site, and Kingspan’s traceability system enabled us to notify all affected customers swiftly. Kingspan will work with and support customers through this process.”

A spokesperson for the Department of Levelling Up, Housing and Communities said: “As part of its ongoing investigation, the OPSS has issued Kingspan with notices to stop the supply of certain products, which have been found to have lower fire safety performance levels than as described when sold.

“Kingspan have been told to inform customers who have purchased these products immediately. We will continue to support both the OPSS, as well as regulatory partners, in taking the necessary steps to protect people and places.”

Kingspan’s Kooltherm K15 product hit the headlines after it emerged a small amount of it had been installed on Grenfell Tower. Kingspan later denied the firm had acted in a dangerous way when it emerged it had continued to sell Kooltherm K15 insulation for 14 years using a safety test certificate for a previous version of the product.