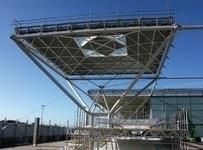 The public inquiry into a second runway at Stansted will be sped up to prevent the Conservatives being able to cancel the project if they get into government, according to reports.

The Times reported on Saturday that for the first time, a significant planning inquiry will be heard in two separate rooms at the same time to speed up the process.

The Conservatives have said they would refuse permission for the £2.3bn project to build a new runway and terminal, but the move to speed up the inquiry could result in approval before the next election is called, with a process designed to take six months to complete. The inquiry, which starts next April, had been expected to take 18 months.