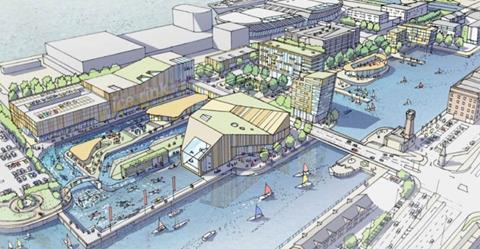 Mayor of Liverpool Joe Anderson has unveiled a £1.5bn regeneration plan for Kings Dock and Lime Street in the city centre.

Plans for Kings Dock, which is the single largest development on the Liverpool waterfront, include an Olympic standard ice rink, an extreme sports complex, as well as restaurants and homes.

The dock is currently home to the BT Convention Centre as well as the 12,000 capacity Echo Arena, which was completed in 2008.

Alongside the development of Kings Dock the Mayor announced plans to transform Lime Street and parts of Mount Pleasant, which will see a new television and music venue, hotel, cinema and student accommodation.

The plans are currently at the initial development stage, with a detailed planning application expected to be submitted in early 2015.

Speaking about the plans, Liverpool Mayor Joe Anderson said: “These schemes demonstrate there is a vibrant, exciting future ahead for Liverpool.

“The projects we are developing for Kings Dock and Lime Street will make the city an even greater place to live, work and invest.

“Crucially though, they will bring thousands of jobs into the city which will ensure we have a sustainable future. I promised our best days are ahead of us, and these key projects are evidence of some of the things we have planned for the future.”

“Lime Street has been an area which was forgotten for far too long. It is one of the first things visitors to our city see when they step off the train and I am committed to transforming this into the gateway our world-class city deserves.

In April, Liverpool council approved plans for a £260m scheme in Anfield which included an extension of the main stand at Liverpool FC stadium as well as new housing, business and retail premises and a new community facility in the area.