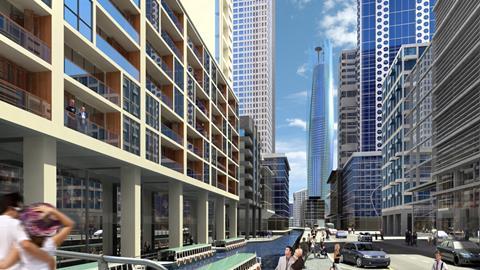 Liverpool council’s planning committee has thrown its weight behind plans to regenerate some 60ha of dockland to provide some 9,000 homes and world-class leisure facilities.

However Unesco inspectors have warned that the proposals, which include the tallest building outside London, risk overshadowing the city’s World Heritage Site Pier Head buildings.

The plans will now pass to the Department for Communities and Local Government to decide whether a planning inquiry will be required for the scheme.

Council leader Joe Anderson said the “yes” vote was one of the most significant and far-reaching in the city’s recent history.

“It is a vote of confidence in a new beginning of a great city,” he said.

“The scale of what is being proposed is breath-taking. It is a scheme which is unprecedented in its ambition, scope and potential to regenerate a city.
“We do not live in the past, we are not a museum. I care passionately about the future of Liverpool and the opportunities and life chances we give our children.

“Today’s decision is for future generations.

“Everybody - including the committee - is well aware of the concerns about heritage, but we can have the strikingly modern, while retaining our World Heritage status.”