Construction contracts worth £294m up for grabs says transport secretary 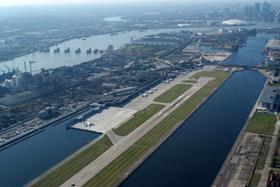 The government has given the go-ahead to a £344m expansion of London City Airport.

Grayling said construction and procurement contracts worth £294m are up for grabs as part of the expansion programme.

The approval comes after London City Airport appealed a decision by former London mayor Boris Johnson to block what was then a £200m expansion programme on the grounds that it would be too noisy.

The government’s planning inspector recommended the appeal be allowed - agreeing with the airport that it had sufficient plans to mitigate the noise - a recommendation the government has now accepted.

The airport estimates its new expansion scheme will create 500 construction jobs and could potentially contribute £1.5bn to the UK economy by 2025.

In addition to the airport expansion, London City Airport will also make a number of investments in transport links around the airport, including funding the cost of additional DLR rolling stock (£2.6m), investing in a bus and taxi access scheme and improving walking and cycle routes to the airport.

Commenting on the decision to approve planning for the airport’s expansion plans, chancellor Hammond said the expanded airport will make it “easier to visit and do business in the City of London” and “further strengthen the city’s status as the world’s leading financial centre.”

Transport secretary Grayling said: “This is fantastic news for London and Britain as a whole. I am determined to invest in the infrastructure this country needs, to help people get around more easily, boost investment and create opportunities.”

He added: “Companies across the UK will be able to bid for construction and procurement contracts worth £294m, meaning the benefits will be felt up and down the country.”

Reaction to today’s announcement has been mixed.

She said: “When Sadiq Khan took office he withdrew the previous Mayor’s opposition to the City Airport expansion plans and in doing so he paved the way for today’s decision by the government.

“From not being able to sleep with the windows open due to aircraft noise at night, to higher levels of asthma in children who live in the area - people in east London are really going to suffer because of this reckless decision.”

However, RICS president and head of infrastructure at EY, Amanda Clack, said the announcement was a “shot in the arm” for post-Brexit infrastructure investment.

Clack said: “Today’s London City Airport announcement will be a shot in the arm for confidence in investment in UK infrastructure.

“Post-Brexit, it is more important for the UK to remain competitive in a global market and world-class infrastructure can be a key differentiator.”