London developers are on a roll

What happens to the developers today happens to construction tomorrow, so they say, and if true, then it might be not as bad a year as many fear.

Several London focused developers outperformed the FTSE 100 this week with a flurry of good news. Minerva confirmed that it was in takeover talks on 20 May, which sent an already hopeful share price skywards.

However the real “blockbuster” results were those of Land Securities, says Graham Jones of Arbuthnot Securities. Profit was up 14%, rental values up 4.7%, and total asset values up 9.7% for the year to £10.6bn - making a triple whammy of good news for the developer that started work on the Walkie Talkie tower earlier this year with Canary Wharf group. “They were the first to start their development push,” Jones says, “and there’s a great deal of scope for more development.”

“They’re exposed to retail in London, which is going like a train,” praises Nan Rogers of Collins Stewart.

The relative disappointment of the week was rival British Land, where pre-tax profit slipped from £1.13bn to £830m, although its property portfolio was up 6.9% in value. “They talked about moving into Europe - not necessarily where we think they should be,” says John Cahill of Evolution Securities.

“It’s had these starts that are holes in the ground for a number of years,” complains Jones, and the market seemed to agree, as shares slumped 3% on Monday when the results were announced.

Still, even British Land managed to keep pace with the FTSE 100 this week and so long as you are developing in central London, making money is almost like shooting fish in a barrel, says Jones. “If you are developing in W1, WC2, SW1, EC2, EC3 you now have to do spectacularly badly to not do some really good returns,” he says.

The question is - can a blisteringly hot few square miles around the river Thames make up for the lukewarm temperature of the rest of the island? 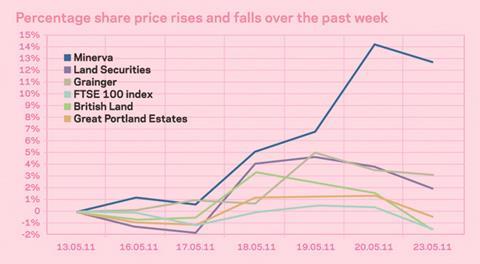