London faring better than most in wake of covid crisis, RLB says

London is one of the three cities in Europe faring better than others, a survey of Rider Levett Bucknall offices into the covid-19 pandemic has found.

The capital, along with Amsterdam and Hungarian capital Budapest, is holding up well, respondents said, with sites continuing to operate during lockdown being cited as one reason for its robustness. 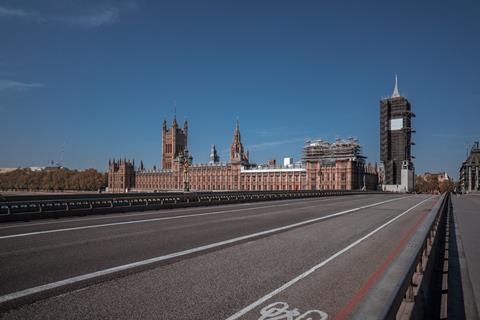 The survey said Athens, Dublin, Madrid and Moscow were the most affected cities by sector.

The firm said London had benefitted from sites staying open when the UK went into lockdown on 23 March.

RLB added: “Construction [in the UK] was excluded from the lockdown restrictions. Although this led to some short-term confusion and the closure of many sites, the CLC Site Operating Procedure, which was published very quickly after the lockdown, gave a framework for sites to reopen very quickly. This has not been the case around the world with many countries having complete site closures for several weeks.

“The other issues that may have made London more optimistic than other cities are the size of projects – large projects have been generally affected less than small projects and London has a lot of large projects. Similarly, London has a lot of active infrastructure work, health projects and digital industry all of which have been much less affected by the impact of covid-19 than other sectors.”

It added that interventionist measures such as the furlough scheme, due to finish at the end of October, and telling public sector clients to keep supply chains intact and bills paid had also helped. “These have had a significant impact on the construction sector in the UK and meant that the sector has been able to weather the storm reasonably well – so far.”

It is the second monthly survey RLB, which has 22 affiliate firms around the world and employs 4,000 people globally, has produced since the coronavirus crisis escalated.

But a quarter said the recovery time would be more than 15 months, up from 13% in April.

In the spring, RLB said it was delaying the introduction of its 10-year plan by six months because of the coronavirus pandemic.

The firm was due to begin implementing its decade-long strategy, nearly 18 months in the making, at the beginning of May but chief executive Andy Reynolds said it is now set to be introduced in November.

Meanwhile, the firm has rejigged its healthcare business which is now being headed by partner Stewart Binns.

The division has been split into three areas including capital programmes and estate strategy and masterplanning. Binns, who joined RLB in 2018 after leading the health division at Turner & Townsend, will continue as head of project management in the firm’s Yorkshire and Humber region.