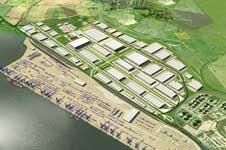 The London Gateway port project in the Thames Gateway, which Laing O’Rourke was to build for £1bn, is under review. The scheme was set to be the UK’s first 21st Century major deep-sea container port and Europe’s largest logistics park.

Mohammed Sharaf, the chief executive of the project’s developer DP World, said that he was “reviewing all the numbers” for Europe’s largest port and “is working hard to make it happen”.

However, Ray O’Rourke, Laing O’Rourke chief executive, today denied there were funding problems. He said that the slow progress of the project had come from the team. He said: “Projects the size of London Gateway will inevitably take a lot longer than what was said at beginning.”

DP World announced that the first 13,000 vessel would call in London Gateway by spring 2010.

Shipping volumes between Asia and Europe fell 17% in January alone according data produced by the European Liner Affairs Association.