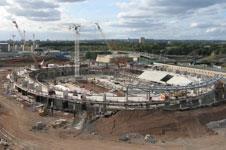 The mayor of London today announced almost £20m in new funding for two initiative intended to boost employment on the 2012 Olympic Games, particularly in the five host boroughs.

The £19.6m will be spread across two projects:

Boris Johnson, mayor of London, said: “The signs are that London has turned the corner out of recession but we know from previous experience that the labour market is a tough place to get back to for those who are currently unemployed. We are creating jobs to equip unemployed Londoners with the whole range of necessary skills, to remove the barriers that prevent them from getting into work and staying employed.”

The 2012 Olympics are expected to create around 173,000 work opportunities (including volunteers and short-term contractor jobs). The initiatives announced today are intended to support 7,000 Londoners into sustainable employment. The Five Borough Employment scheme will support 5,600 Londoners directly and the 2012 Legacy project will support a further 1,400 Londoners find opportunities before and after the games.

London has been one of the areas worst affected by the recession, with the total of jobseekers ballooning by 40% over the last two years. Employment figures are not expected to return to pre-recession levels until 2016. Employment in the boroughs in which the Olympic facilities are being built, Greenwich, Hackney, Newham, Tower Hamlets, and Waltham Forest, is below the London and national averages.