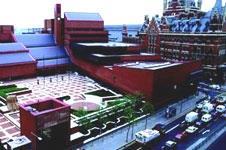 Plans to build a national medical science centre behind the British Library in central London are being blocked by local residents.

The proposed £500m UK Centre for Medical Research and Innovation is expected to carry out ground-breaking cancer research and is supported by prime minister Gordon Brown.

However, the Somers Town Peoples' Forum campaign, formed by residents of the nearby Somers Town estate, want the land to be used for housing and say the plans are “completely inappropriate”.

Developer the Medical Research Council said it would consult residents.