NLA report says 455 towers are now planned for the capital

The number of towers set to be added to London’s skyline has increased in the past 12 months with one tower a week coming out of the ground last year, according to a new report released today by New London Architecture.

Research by the NLA has shown that more than 450 towers were planned for London in 2016, up from the previous year’s 436.

According to the fourth annual London Tall Buildings Survey, carried out by the NLA and property consultant GL Hearn, 152 new towers over 20 storeys or more will have been built by 2019 – just six years after the original survey was completed.

A total of 455 tall buildings are in the planning pipeline with the survey estimating they have the potential to deliver 100,000 homes.

Construction began on 48 towers last year, an increase of 68% on the 29 that started in 2015 although the number submitted for planning last year was down 30% on the previous 12 months. Of the 48 that are being built, more than half – 25 – are going up in Tower Hamlets.

Speaking about the report, NLA chairman Peter Murray said: “At NLA we remain of the view that in a growing city, well designed tall buildings in the right place are appropriate.”

The report also found that 24 of London’s 33 boroughs have a tall buildings pipeline with 82 slated for zones three and four and a further 25 for zone five. 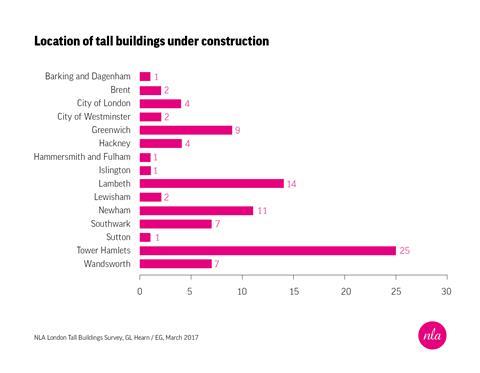 Tower Hamlets was the borough with the most number of completions – 10 – and London-wide among those schemes to finish last year were AHMM’s Ruskin Square in Croydon, UN Studio’s Canaletto building in Islington and Squire & Partners’ Elephant One scheme at the Elephant & Castle redevelopment in Southwark.

Two London boroughs, Tower Hamlets and Greenwich, have 145 towers planned between them, which accounts for almost one third of the 455 in the pipeline.

London’s deputy mayor for planning Jules Pipe, the former mayor of Hackney, where 17 towers are planned, said: “Without doubt, tall buildings have a role to play in London and the forthcoming London Plan will include clear guidelines to help ensure they are built in suitable areas, make a significant contribution to the skyline and, where they include new homes, help ease the capital’s housing crisis.”

Report at a glance

Top 5 boroughs with the most number of towers planned

Boroughs which have no planned tall buildings include Bromley, Enfield and Kensington & Chelsea