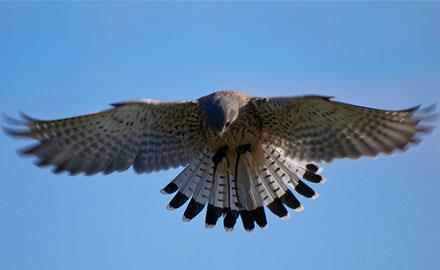 Construction workers widening the M25 in Essex have helped a family of kestrels make a home on the busy civil engineering site.

Erwin decided to make a nesting box for the birds and attached it to the side of the concrete silo. Since then six chicks have hatched and the site team is following the new family’s progress via a webcam set up to monitor the nest.

Mr Erwin said: “I think the kestrels were attracted to the batching plant by the warmth from the heaters that are used in the concrete production process. It looked like they were searching for somewhere to nest and I thought that maybe I could help.”

“I was really excited when I saw the kestrels using the box - it provides a safe place for them to set up home and means that, when the batching plant is removed at the end of the project, we can move them to nearby countryside while disturbing them as little as possible.

“In April I put a little camera up to film inside the box and now we have a continuous feed from the nest.

“It was really interesting to see the birds settling in. The female would sit on the six eggs while the male went hunting. He sits on top of the box with mice in his beak.

“Occasionally she will fly off for a little while to stretch her wings. Now that the eggs have actually hatched it is absolutely fantastic, and the family is doing really well. It won’t be long now before the chicks fly the nest.”

Kestrels are a familiar sight along UK motorways and are noticeable by their distinctive pointed wings and long tails. The RSPB estimates that there are around 38,000 breeding pairs of kestrels in the UK.