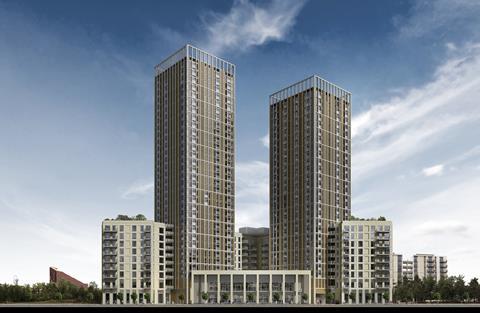 Mace has been appointed as main contractor to build the first element of the second phase of the residential development at East Village, the former London 2012 athletes’ village.

The build for joint developers Delancey and Qatari Diar comprises two towers at 30 and 26 storeys housing 482 homes next to Celebration Avenue and Victory Park. It is scheduled to complete in 2018

Located adjacent to the Queen Elizabeth Olympic Park the East Village is already home to over 6,000 residents across 2,818 homes.

A major regeneration project for the area there is planning consent for further phases in-line with the 2005 Stratford City Masterplan.

Mark Reynolds, Chief Executive at Mace, said that having worked on the London Olympic project since the beginning he was delighted that Mace were now able to bring its residential expertise to the East Village.

Stafford Lancaster, spokesperson for Qatari Diar Delancey, said Mace had “demonstrated its expertise” through its work on the London 2012 Olympic and Paralympic Games and the LLDC’s ongoing transformation of Queen Elizabeth Olympic Park.

He added that the developers looked forward to “seeing how the team will bring this expertise and local knowledge to these new homes at East Village, further building on the strong residential legacy we have already achieved.”