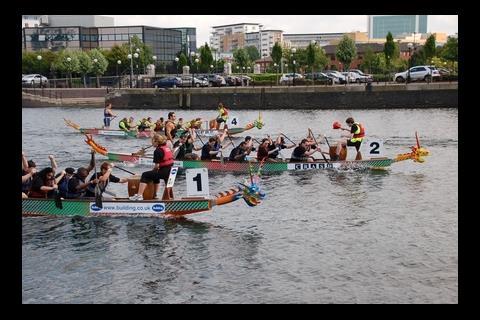 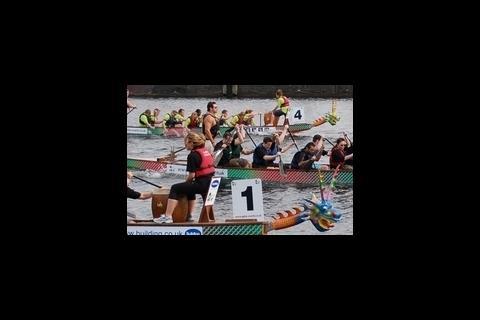 The third Construction Industry Dragon Boat Challenge, held in Manchester, has raised a £19,000 for CRASH, the Construction and Property Industries Charity for Homeless People.

This unique contest sponsored by Building magazine and run by Gable Events, saw 44 teams take to the water and paddle their way through a fun and competitive three round knock-out competition.

The construction industry was splendidly represented, with 31 companies putting forward teams. The dragon boats take 10 paddlers, plus the all important drummer who (in most cases) kept the crew paddling together and on top of the water.

Despite a couple of capsizes along the way, two thrilling semi-finals quickly separated the men from the boys, whittling the final competitors down to just four teams. A close-run final between teams from HGB Construction Ltd, Wates Construction, Bovis Lend Lease and Murraywood Construction Ltd proved a gripping end to the day’s events.

For the third year running the Murraywood Construction team, ‘Murraywood Marauders’, were ecstatic to hold on to their title of ‘Dragon Boat Champions’.

The Construction Industry Dragon Boat Challenge is a major fundraising event for CRASH, and we are incredibly grateful to everyone who took part or sponsored teams. Every penny raised by this event will go directly to help projects for Homeless People in the North West of England.