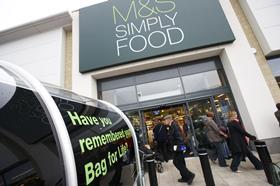 Marks & Spencer has announced plans to double the size of its network of Simply Food stores by building 150 of them over the next three years.

Around half of the new stores will be 2,000 sq ft and operated with one of M&S’s existing franchise partners in convenience locations such as motorway service areas, train stations, hospitals, petrol station forecourts  and airports.

Steve Rowe, executive director of food said: “Today, we are confirming plans to extend our unique Food offer to even more UK customers by opening c.150 new Simply Food stores in areas where we are currently significantly under represented.

“This franchise and owned expansion offers us an opportunity to continue to grow our customer base and business, building on the progress we have already made.