May: We must 'repair' the housing market 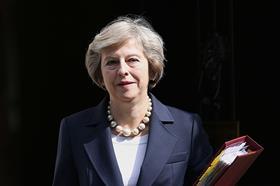 Prime minister Theresa May has vowed to “repair” the “dysfunctional” housing market in her speech at the Conservative party conference.

In a wide-ranging speech - in which she promised to build a “united Britain rooted in a centre ground” in which opportunities are shared more equally - May said it was “not right” that the housing market “continues to fail working people”.

She said: “This means using the power of government to step in and repair the dysfunctional housing market.”

Her comments come after communities secretary Sajid Javid and chancellor Philip Hammond announced a £5bn package of funding to boost housebuilding on Monday.

The PM also touched on infrastructure, reaffirming her commitment to HS2 and saying the government needs to take “big, sometimes even controversial, decisions about our country’s infrastructure.”

She said a decision on a new airport runway in the south east would be taken “shortly”, adding: “We will take the big decisions when they’re the right decisions for Britain.”

The PM also called on firms to train local young people before taking on “cheap labour” from overseas.

On Brexit, the prime minister insisted the government does have a plan for leaving the EU, and indicated the UK could lose access to the single market.

But she added: “Let’s state one thing loud and clear: we are not leaving the European Union only to give up control of immigration all over again.”

On sustainability, the PM said the UK would ratify the Paris climate change agreement.