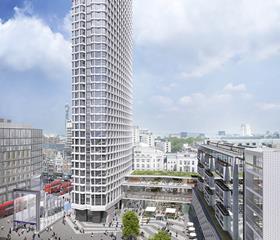 Sir Robert McAlpine has been told to pay more than £1m after losing a legal row with developer Almacantar over its work to refurbish London’s landmark Centre Point tower.

The contractor had been in dispute with the developer after the pair fell out four years ago over the type of contract being used on the deal.

The two firms’ legal battle centred on a pre-construction contract signed in September 2012 which saw McAlpine paid 50% of the fee up front with the rest due once main works had begun.

In June 2014, McAlpine told Almacantar that it would not carry out the work under a design and build contract but would be prepared to work on a construction management basis or management contract form of procurement.

But the developer rejected the offer and the deal was terminated that September with Multiplex then being appointed as a replacement contractor, eventually starting on site the following January.

In September 2015, McAlpine claimed Almacantar owed it the full value of contract, which was just under £1m but the developer refused to pay. In April last year, an initial adjudication ruled in McAlpine’s favour.

But the firm has now been told to hand over £1.1m, which includes costs, after the High Court decided to overturn the original decision.

Almacantar boss Mike Hussey tweeted he had no sympathy for McAlpine following last week’s decision by Mrs Justice Jefford. “You don’t get paid if you don’t turn up.” McAlpine declined to comment.

The Centre Point tower (pictured), which was completed in 1966 by architect Richard Seifert, has been turned into 82 luxury flats by the architecture firm Conran & Partners. Rick Mather also carried out work on the scheme, designing the retail and public spaces.

The 33-storey high tower, which overlooks the eastern end of Oxford, was listed at grade II in 1995. Its tenants in the past have included business organisation, the CBI.

Work completed at the end of last year with one-bed flats starting at £1.8m and a five-bed penthouse being marketed for £55m.