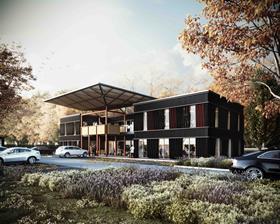 Northern Ireland offsite specialist McAvoy has been appointed to build a regional office for Homes England in the new town of Northstowe, Cambridgeshire.

The two-storey building is designed by Proctor and Matthews Architects and will be built using modules manufactured off-site – with construction starting shortly.

Homes England’s decision to use modular in the development of its building comes as government has ramped-up efforts to promote modern methods of construction, espeically in its own construciton, to boost the sector’s productivity.

The town is being built on the former site of RAF Oakington, six miles away from Cambridge.

Housebuilders including Barratt and Taylor Wimpey are developing homes at the scheme, while Kier has recently been appointed to build two new schools for the settlement.