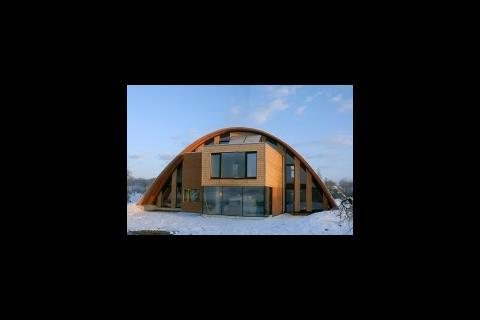 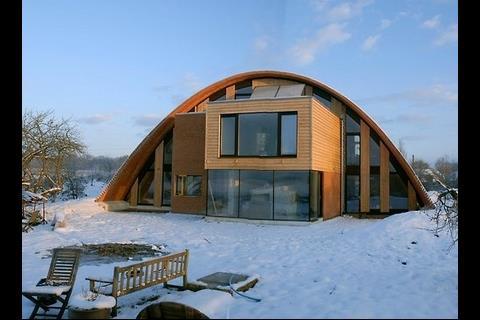 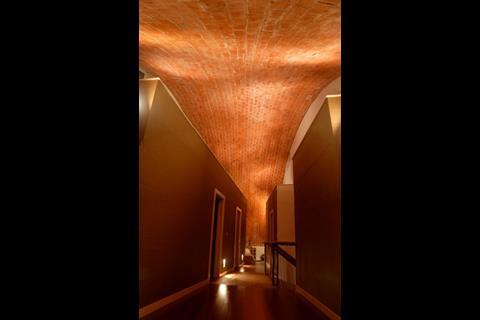 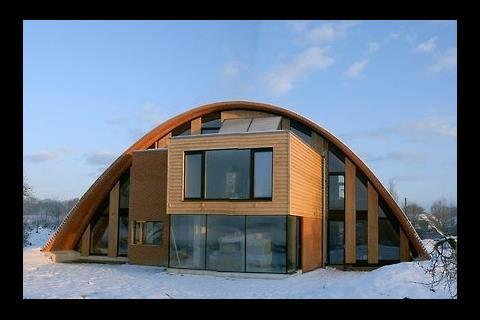 Medieval architecture has been employed to provide energy-efficient living in Kent, in a home that is to feature in Channel Four's Grand Designs programme tonight.

The four-bedroom Crossway house in Staplehurst uses a large vault constructed out of clay tiles spanning 20m to create a structure with a low embodied energy and high thermal mass.

The basic design is adapted from a historic Mediterranean technique called “timbrel vaulting”, which uses thin bricks to create lightweight and durable buildings.

The arch uses three layers of overlapping tiles – creating an overall thickness of 100mm – which is then covered with insulation and a waterproofing layer followed by 20 tonnes of gravel and soil.

Any necessary heating comes from solar energy through the UK's first example of a combination photovoltaic and thermal heating system. An 11kW biomass boiler has also been installed.

The house has been designed by architect Richard Hawkes – who will be its first occupant – with structural design by Michael Ramage, who is based at the University of Cambridge's architecture department, and Philip Cooper, who teaches in the department and is a director of Scott Wilson Engineers.

While more expensive than some conventional homes, the designers of Crossway believe that its design and technology could ultimately be a prototype for cheaper energy-efficient homes.

“The design is cost-effective in that the home is relatively simple to build and, once you know what you're doing, it's quick,” says Ramage. “Many of the costs come from the new technology it uses for energy storage and generation. If those become more widely available, making a similar house cheaply in much larger quantities may be possible.”

Where possible, the designers have used locally sourced materials, such as “Kent peg” roof tiles, which have been made in the area for centuries. The triple-glazed windows, however, were imported from Austria as they are not on the market in the UK.

“The building demonstrates how contemporary design can celebrate local materials and integrate new technologies to produce a highly sustainable building that sits lightly on the Earth,” adds Hawkes.