A dispute over access to land owned by the Ministry of Defence could add £350m to the cost of turning Richmond House into a temporary debating chamber for MPs while the Palace of Westminster is refurbished.

A report from the joint committee looking into the Draft Parliamentary Buildings Bill has revealed that the MoD has thrown a spanner in the works of Lendlease’s plans to overhaul the former government building in Westminster. 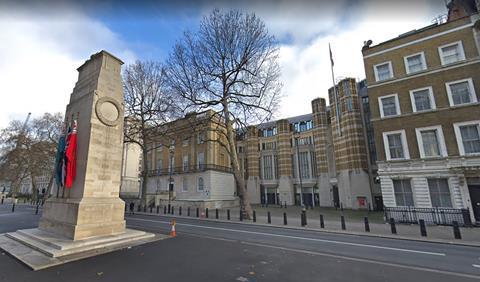 The committee, which is made up of both MPs and peers, said plans for work on Richmond House (pictured) had been based on Lendlease being able to get access to land within the Ministry of Defence’s estate that is currently used as a car park.

The land would be largely used for the delivery of materials and the construction of temporary accommodation for those working on the building.

But the committee said it had learnt the Northern Estate Programme team’s attempts to discuss these plans with the MoD had been met with a “refusal to engage”.

The report, Governance of Restoration and Renewal, said: “Although it would be possible to work around the loss of this land, because of the need to move access arrangements and dismantle and rebuild accommodation as the works developed, there would be significant extra costs - we were told in the region of £350m.”

The committee was also told the issue had the potential to delay the estate programme, saying it could delay the decant of the Houses of Parliament to 2028.

The committee said while there could be “significant security reasons” for the MoD not wanting the land to be used to facilitate the refurbishment works, none had been stated.

The committee said: “The situation in relation to the Ministry of Defence land must be clarified swiftly.”

According to the report Cabinet Office secretary David Lidington became involved in discussions with the MoD and Leader of the House Andrea Leadsom after a “considerable time during which Commons officials were able to make no progress in this impasse”.

The delay and uncertainty has already led to alternative contingency plans being drawn up.

The committee said the “delay and confusion” had highlighted the need for the Northern Estate Programme to be brought under the remit of the sponsor body that will be responsible for the restoration of the Palace of Westminster.

It said the conflict also showed the need for “some form of government commitment to the project so that, if necessary, ministers can talk to ministers to resolve problems”.

Richmond House is part of the £500m Northern Estate Programme which involves upgrading a number of offices across Westminster to house MPs and parliamentary staff while the Palace of Westminster is overhauled.