Contractor Morgan Sindall plans to grow its new London business to £150m-turnover in the next three to four years to capitalise on the booming office market in the capital, according to regional managing director Peter Jacobs.

Jacobs said the business, which he has been running since he joined from Bovis Lend Lease in February, had already picked up contracts worth £50m since he took control and could turn over £30m in the year ending 30 June.

Morgan Sindall set up the business a year ago last week in order to take advantage of the growth in the London construction market, particularly in commercial office space. Jacobs said he had picked up three further contracts after securing the £26m job to build the Maurice Wohl Neuroscience Institute (pictured below), designed by Devereux Architects, for King’s College London in February.

These include construction of the £8m Mayesbrook Park sports centre, which is jointly funded by the Olympic Delivery Authority and Ebbsfleet Community Sports Centre for use as an Olympics and Paralympics training venue. Two other contracts, worth £14m and £3.5m are under commercial confidentiality arrangements.

Jacobs said: “We’re very busy tendering at the moment, and we’re going to the big commercial developers and saying ’we’ve got the strength of Morgan Sindall behind us, but we’re effectively a new entrant to the market.’ And they’re taking interest.”
Jacobs was at Bovis Lend Lease for 24 years, and most recently delivery director on the athletes’ village for the London Olympics. 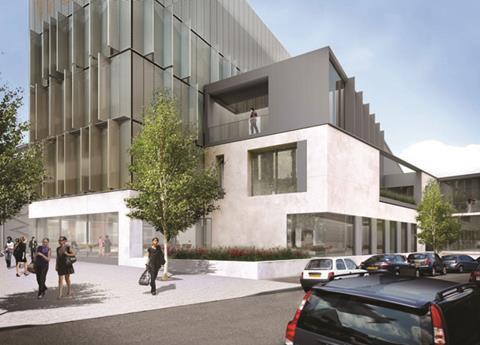