Most construction firms have no coronavirus recovery plan

More than 80% of construction firms do not have a plan in place for how to recover from the covid-19 pandemic.

A sentiment survey carried out by Building, along with its sister titles Building Design and Housing Today, has found that a majority of firms have either not started or are in the very early stages of planning their recovery.

The survey, which collected responses between 17 and 23 April, found that 27% of companies have not started work on a recovery plan at all.

Another 27% said they were very early in the process, while 30% said their planning phase was in progress.

Just 15% of firms said they already had a plan in place and that it was being implemented.

This will be a cause for concern for many industry leaders who have been calling for firms to start plotting a route to recovery.

The former head of the civil service, Lord Kerslake, has said the industry must start preparing how it will bounce back from the pandemic.

Kerslake, who was recently named chair of framework provider Pagabo, told Building: “Into the recovery phase, the government will want to see the economy revive as quickly as it possibly can, and I do think that getting projects that are probably paused at the moment under way, and getting them under way quickly, is going to be critical to the recovery.

“A lot of people are going to be giving thought to how we best achieve that.”

The survey, which attracted responses from nearly 300 people across the industry, also found that an increasing number of firms are being hit by materials shortages.

>> The long and winding road to recovery

Difficulty securing materials was the top reason sites had shut down, cited by over 43% of firms, while the impossibility of creating a safe working environment and the moral decision to stop “non-essential” work to reduce virus spread were contributing reasons for almost 43% and 41% of respondents respectively.

Sixty-two percent of people said in general they were finding it difficult to source materials.

But in a sign of hope for the industry, the survey found more people believe work on their projects will restart in the coming weeks compared with when they were asked the same question in our March survey.

In March 36% of respondents said they feared their sites would not reopen for several months. This figure has now fallen to 18%, with 43% saying they expect work to restart within weeks. 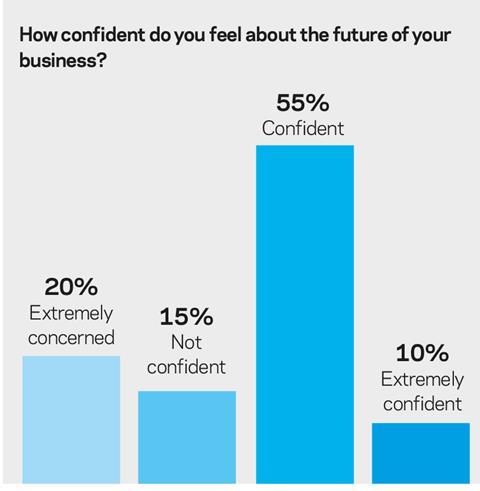 The survey was carried out as a number of main contractors, including Mace, Multiplex and Sir Robert McAlpine, announced partial reopening of their sites, while housebuilders Persimmon, Vistry and Taylor Wimpey confirmed they were set to start a phased reopening.

Increasing confidence that work can be restarted on projects soon was not matched by firms’ appraisal of their survival chances, which remained at the same level as last month.

In April the proportion of “very concerned” fell to 23% but the percentage of those “concerned” increased to 71%. They said trading had slowed but their firms were solvent for now.

One respondent said: “Once the current workloads are complete, there will likely be reduced investment and capital expenditure from business.

“This means less construction work, tighter margins, lost skills and a return in general to 2008-14 working conditions. It will set the industry back 10+ years.”

Almost 80% of respondents said the cash flow from their businesses had been affected.

While 21% said they had stopped being paid, 69% said they were paying their own invoices the same as before. 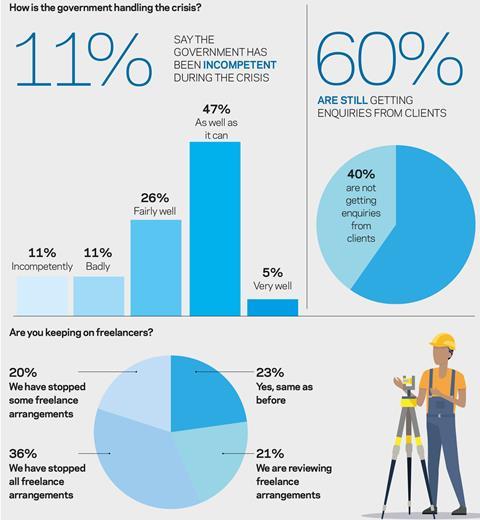 There was widespread support for the government’s policies during the covid-19 pandemic, with 78% saying it was handling the situation very well, as well as it could, or fairly well.

In March, 49% said the government measures announced were not enough to tackle the crisis.

In terms of staffing, two-thirds of respondents said staff at their companies either had been or would be furloughed. Many said issues around staffing and employee welfare were the biggest challenges they faced at the moment.

A number of respondents were also concerned about their ability to keep staff safe even if they were adhering to site operating procedures around 2m social distancing rules.

A number of respondents also had views on what measures needed to be implemented by government to ensure the post-lockdown bounce back was as swift as possible.

One said the government could help by “providing detailed, unambiguous guidance on how and when sites can ease restrictions, to ensure there is a consistent approach by all within the industry.”

Another said there needed to be public procurement on a large scale, saying it should be similar to the level seen in the 1950’s and 60’s following the Second World War.

In terms of staffing two-thirds of respondents said staff at their companies either had been or would be furloughed. 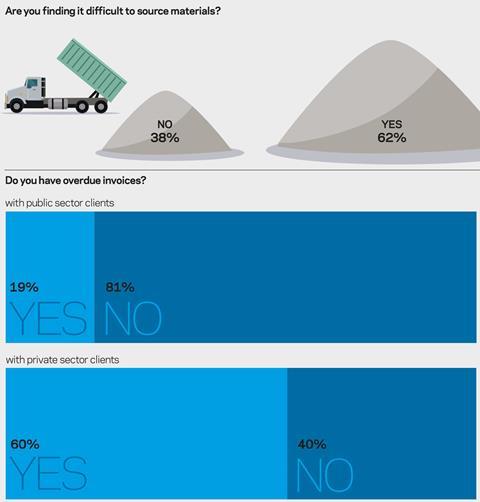 Many people said issues around staffing and employee welfare were the biggest challenge at the moment.

One said: “Maintaining morale while all members of the practice are home-working [is our biggest challenge].”

Another said: “Making sure our staff are OK. We are most concerned about those on their own or trying to handle younger children.”

A number of people were also concerned about their abilities to keep staff safe even if they were adhering to site operating procedures.