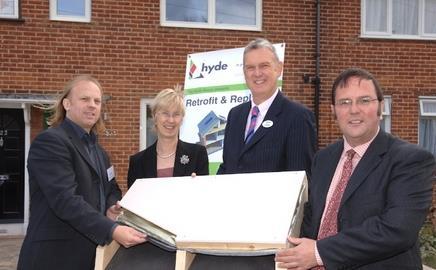 A brand new eco-home which has been retrofitted to have its carbon emissions reduced by 80% was officially opened last Thursday (23 October) by Dr Phyllis Starkey MP. The new project led by social landlords,

The Hyde Group and partners, ECD Architects and Mears, is dubbed Retrofit & Replicate and consists the refurbishment of a three-bedroom house in Mottingham, South-east London with a range of eco measures. It is estimated that the new technology could reduce the residents’ fuel bills by as much as 65%, which equates to approximately £600 annually, a figure set to rise even higher as fuel costs continue to spiral.

Starkey, who chairs the Communities and Local Government Select Committee looking into existing buildings and climate change, said at last week's opening:: “In 2004, the UK's 26 million homes emitted 41.7 million tonnes of carbon dioxide: this represented more than a quarter of the UK's emissions (27%). Much more needs to be done to encourage energy saving in our homes, which is why I am pleased to see the Hyde Group and its partners taking a lead in the critical work to make our existing homes more energy efficient.”

Once occupied, the eco-home will be closely monitored over two years and successful technologies will then be considered for replicating in Hyde’s stock investment programme across its 40,000 homes.

Hyde Group chief executive, David Eastgate said: “The Retrofit & Replicate project addresses the huge challenge of reducing CO2 emissions in existing housing stock and I am very proud that Hyde and its partners are looking to make such a valuable contribution to reducing carbon emissions and tackling fuel poverty.”

The property retrofitted is a 1930s mid-terraced home, which was in need of refurbishment. It is an average family home, underlining the purpose of this project to identify replicable solutions for reducing CO2, which can be used in everyday homes right across the country.