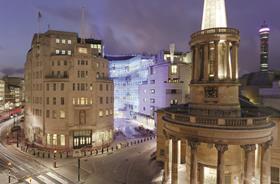 A high-powered committee of MPs has criticised the “staggering” high running costs of the BBC’s global headquarters, Broadcasting House in central London.

Margaret Hodge, chair of the public accounts committee, criticised the running costs of Broadcasting House - redeveloped by Lend Lease and designed by MacCormac Jamieson Prichard and Sheppard Robson - after the National Audit Office (NAO) published a report on the BBC’s management of its estate published this week.

Hodge noted the cost of the building, not including the cost of specialist space such as studios, was around 50% more than other properties in the same part of London and almost three times higher than the UK average for comparable buildings - at £1,422 per sq m in 2012-13.

The BBC has reduced the size of its estate by 29% over the past 15 years through a rationalisation programme that has included the development of New Broadcasting House and its Salford base.

While the NAO said the broadcaster had “made good progress”, it said the BBC had missed a target of keeping running costs at 6% of license fee income.

It added that ageing sites at Cardiff, Bristol and Belfast required “extensive maintenance” and suffered from poor infrastructure that had disrupted programme-making.

Plans are in place to relocate Cardiff operations in 2018, but the future of the sites in Belfast and Bristol has yet to be determined.

Anne Bulford, managing director of finance and operations at the BBC, said: “The reality is we’re set to save £67m a year by using our properties better.

“The NAO report makes clear that we are now more efficient and have met our long term aim to upgrade BBC properties without increasing costs.

“Had the licence fee not been frozen the proportion of licence fee spent on property would be just over 5% by the end of the charter period, well below the target.”