The scheme will feature a brace of towers – 42 and 58 storeys high – which have been designed by US architect KPF.

It will include close to 450 apartments along with a five star hotel as well as public space.

Tim Gawthorn, the director of Dalian Wanda’s UK subsidiary Wanda One, said: “Following the EU referendum, this important announcement further demonstrates our commitment to deliver an iconic mixed-use development in the heart of London.”

Multiplex is already working with the developer in its native Australia and the firm’s boss in the UK and Europe Ashley Muldoon said: “We are delighted to be working with Wanda globally – and now in the UK on this prestigious project.” 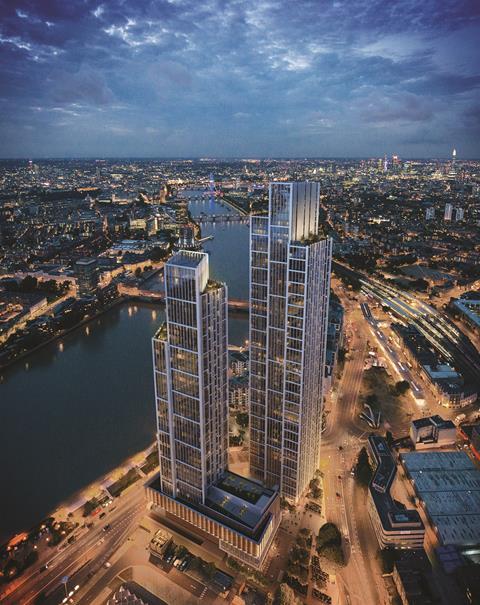 The scheme will feature two towers of 42 and 58 storeys

Multiplex, which is also building the tallest tower in the City of London, Lipton Rogers’ 62-storey scheme at 22 Bishopsgate which has been designed by PLP, replaces Balfour Beatty as the main contractor on the scheme after that firm walked away from the job last November after failing to agree terms for the main build contract.

Balfour had won a pre-construction contract for the job last summer after it was drafted in to replace the original contractor – a pairing of Interserve and China State Construction Engineering Corporation which was first appointed back in spring 2015.