BIG’s proposed Newcastle office block - see from the Baltic, with Foster’s Sage on the left and Wilkinson Eyre’s Stirling Prize-winning bridge in the foreground

Bjarke Ingels Group has unveiled proposals for a 12-storey office block in Newcastle.

The sinuous building, dominating a historic area near the quayside, would be the architect’s first UK building outside London.

BIG opened an office in the capital four years ago on the back of Google’s European headquarters which it is designing with Thomas Heatherwick.

Ingels said: “Our proposal is born from the unique conditions of Newcastle’s architectural elements, the sloping hills and the curvy frames of the bridges over the Tyne.”

Last year BIG was shortlisted by the National Museums Liverpool for the masterplan to regenerate its waterfront campus. It lost out to Feilden Clegg Bradley. 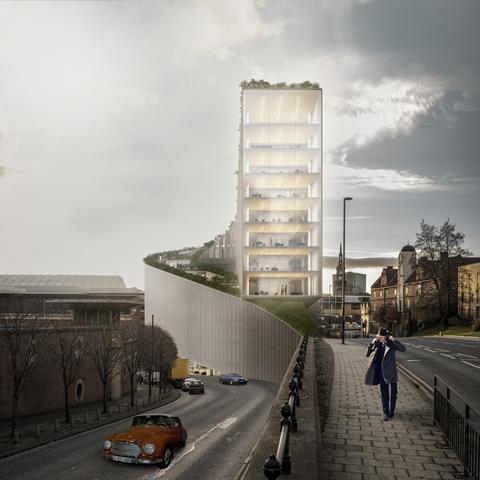 No1 Quayside, on a site currently occupied by the former Stereo bar, would provide 10,000sq m of office space in floor plates starting at 1,260sq m at the base and reducing to 110sq m as the building rises. Each floor would have its own garden, with a green roof capping the building.

BIG worked with local architect Xsite Architecture on the design which has yet to get planning.

Landowner Rob Cameron appointed Knight Frank last year to help work up the proposal for the site which will now be taken to next month’s Mipim property fair to find a development partner. 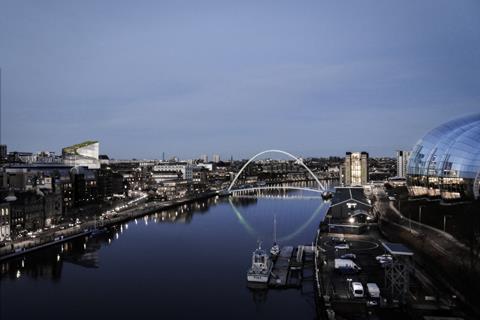 Knight Frank Newcastle partner Patrick Matheson added: “I’m confident there will be a lot of interest as this is an incredibly exciting blueprint for the city of Newcastle.”

He pitched it as a “third modern icon” for the city’s skyline, along with Foster’s Sage on the Gateshead bank of the Tyne and Wilkinson Eyre’s Stirling Prize-winning Gateshead Millennium Bridge.