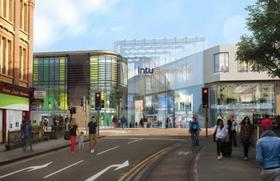 Plans for a £150m redevelopment of the Broadmarsh shopping centre in Nottingham have been submitted to the local authority by retail developer Intu.

If the planning application is successful, construction work could start on site by the first half of 2016, with completion by the end of 2018.

The architect for the scheme is Benoy. The plans involve creation of a new southern gateway from Nottingham main line train station with improved pedestrian routes through the shopping centre and easier connections to the city and surrounding streets.

The development will feature shops, restaurants and leisure facilities, including a multi-screen cinema. The plans also include refurbishment of the car park and bus station, along with improvements to the public realm.

Intu owns a two-thirds stake in the Broadmarsh centre, with the remainder held by Nottingham City Council, which owns the freehold of the land.

A public consultation found that 89% of 1,600 people surveyed were in favour of intu’s proposals.

Intu has a £1.3bn development pipeline in the UK over the next 10 years.

Martin Breeden, regional director of Intu, said: “Nottingham has the sense of a place on the way up. There’s the massive extension to the tram system, improvements to the railway station, increasing amounts of urban living and new independent stores and restaurants popping up and, of course, our own improvements to intu Victoria Centre.

“Our plans for intu Broadmarsh will build further on that progress, bringing new streetscapes, a new cinema and a wider retail and catering offer.”