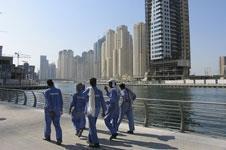 Europeans working in Dubai earn an average of 382,000 dirhams (£73,000) a year - 18 times more than labourers working on the emirate's construction sites.

A survey by the emirate's Statistics Centre has revealed that Europeans had the highest incomes, followed by UAE-born professionals, who earned an average of 324,000 dirhams (£62,000).

While leisure, entertainment and education accounted for 8% of consumption in Dubai households, the figure dropped to just 1% for labourers.