A scheme by JTP Architects to build more than 130 homes at developer U+I’s Old Vinyl Factory in west London has been given planning. 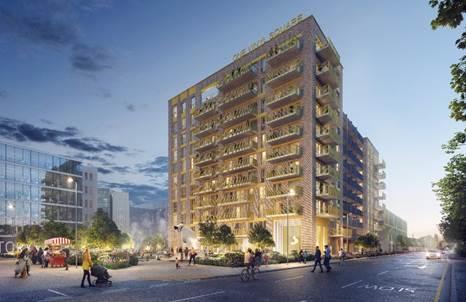 One Vinyl Square is being developed by Joseph Homes and is part of U+I’s transformation of the Hayes town centre site, which was formerly EMI’s global manufacturing HQ.

As well as 134 homes, the proposals include 4,252 sq ft of commercial space, 238 cycle spaces, 67 car parking spaces and associated landscaping.

Originally built in 1907 for EMI’s global manufacturing headquarters, where records by The Beatles and Pink Floyd were pressed, The Old Vinyl Factory is being turned into office buildings, new homes, innovation and educational hubs, shops, cafés, restaurants and a climbing centre.

Masterplanner on the overall scheme is Studio Egret West.