Olympic Stadium could be recycled for 2016 Games 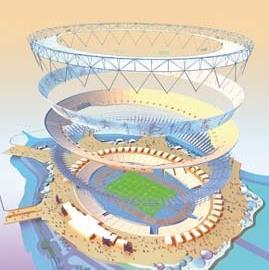 The temporary elements of the 2012 Olympic Stadium could be re-used by the winner of the 2016 Games.

Olympic Delivery Authority chiefs are reportedly in discussions with officials in Chicago, an early favourite to win the 2016 bid, on the possibility of shipping over seating, steel and scaffolds from the £496m stadium after the 2012 Games finish.

The stadium section would then be ‘bolted on’ to a 7,500-seat arena in Chicago’s Washington Park for the 2016 Games.

David Higgins, the ODA chief executive, has said he is willing to have similar discussions with other bidding cities over the next few months.

The 2012 Olympic Stadium was designed by HOK Sport to be reduced from a 80,000-seat stadium to a 25,000-seat stadium after the Games finish, with the leftover materials to be recycled or reused elsewhere.

The ODA told the Guardian newspaper: "We have only held preliminary and very recent discussions with Chicago - at their instigation - covering some of the technical aspects of relocating so many seats, but it is obviously good news that there is already interest in re-using them. We will also continue to explore options to relocate facilities within the UK as a priority wherever possible."