Olympic team warned of B of the Bang repeat 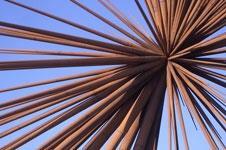 The London Olympic organizers should learn from the legal wrangles over the Commonwealth Games’ B of the Bang sculpture when selecting a piece of art for the 2012 Games, a lawyer who was involved in the dispute is warning.

Peter Wood, senior counsel at law firm Mace & Jones, says he is concerned by reports that a complex 400ft sculpture by Turner prize-winning artist Anish Kapoor is likely to be chosen to mark the 2012 Games, because of the legal and commercial issues surrounding such projects.

“Large, complex, interactive structures intended to be enjoyed by the public pose special challenges for all concerned,” said Wood, who previously led the team that resolved the dispute over B of the Bang, by designer Thomas Heatherwick. “I would urge London mayor Boris Johnson, Anish Kapoor, the funder Lakshmi Mittal and the Olympics organizers to proceed with extreme caution.

“While the B of the Bang was an ambitious and ground breaking design, technical problems meant that it was not fit for purpose. It could not cope with the weather conditions and became a safety hazard. This resulted in a three year legal and technical battle which engulfed the project. Eventually the artist, the consultant engineers and contractors, repaid Manchester council all of the £1.42m costs together with a substantial sum in legal and technical fees.”

Wood urged the mayor’s office to undertake a detailed risk assessment for what is likely to be one of the highest profile, highest risk projects of the entire Olympics building programme.

“It is to be hoped that those responsible for procuring the sculpture will have carefully reviewed the technical and procurement issues associated with such a complex high-profile structure,” he said. “As was apparent from the B of the Bang that there was little or no guidance for designers on how these unique structures will react to the weather. Further, it is often the case that manufacturers are asked to produce elements for this type of structure that are entirely outside their knowledge or experience. This is further complicated by unusual aesthetic and artistic demands which require extreme engineering solutions.”

He went on to discuss the legal issues that need to be considered before commencing: “How should the damages for late completion be calculated – they are usually agreed in advance so that there is a fixed amount per week for any delays, but to be valid they should be a genuine pre-estimate of the losses likely to be incurred. What are the losses that would arise if the sculpture was late?

“Moreover careful thought needs to be given as to how the contracts are structured. With the B of the Bang, the artist wanted to be the person who had prime responsibility for delivering the completed sculpture to Manchester council. This meant that the key designers and contractors could have been contractually at arms length from the council. Advisers for the council made sure that the council was fully protected.”