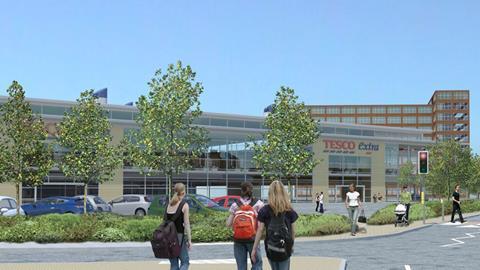 Environmental store will be built opposite Salford City Shopping Centre

Northern Irish contractor Patton Construction has been appointed to build a new 130,000ft² supermarket in Salford.

The £45m store will be situated opposite Salford City Shopping Centre, and work is scheduled to begin in the first quarter of 2012.

The store planned for Pendleton, Salford will follow the Tesco Environmental Store format, and will be built using a glulam timber frame.

Natural daylight will reach the store via roof lights, while a combined heat and power plant will generate electricity and make use of waste heat.

The plant, which runs on naturally produced fuel from sustainable sources such as recycled vegetable oil, will reduce the store’s carbon footprint by a third.

An underground car park beneath the building will boast the first LED lighting of any store in the UK.