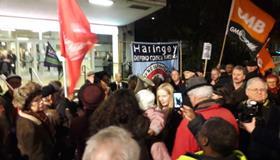 Lendlease said it is still willing to work with Haringey council to build more than 6,000 homes across the borough, despite the prospect of a multi-billion pound partnership between the contractor and the local authority being thrown out next week.

The £4bn venture known as the Haringey Development Vehicle (HDV) would have seen council land being transferred into the deal, a proposal which proved highly controversial during the recent local elections, held in May.

And now a report by the council’s planning office has recommended that the authority’s cabinet terminates the HDV when it meets next Tuesday (17 July).

Planners said the new Momentum-backed administration – voted into power in May on a manifesto which included binning the HDV – was taking “decisive action to set a new direction for the council, with this final decision that the HDV will not now go ahead”.

The planner’s report said the new administration did not agree with a series of assets wholly-owned by the council being transferred into the partnership, while it also objected to the level of risk the project faced.

Given these factors, and despite having no qualms with “the principle of partnerships with the private sector”, the planners’ report recommended that the HDV should be shutdown.

The report admitted that while some people will be happy with the decision to bin the HDV “there will be some who will either be disappointed…confused about the direction of the council, or sceptical about the council’s commitment to delivery”.

Lendlease has said it “remains committed to Haringey” and wanted to work with the council “for the benefit of the people of the borough”.

A letter sent to the council on Monday and signed by Lendlease Europe’s chief executive Dan Labbad suggested the company would be ready to seek redress for the “very significant investment over the last two and a half years” should the administration seek to reverse the decision of its predecessor.

But the Lendlease boss also wrote that the firm was ready start work immediately on building the houses the borough needed.

“Collectively, we have a unique opportunity to make a real difference to the provision of urgently needed homes, jobs and public amenities.

“We have the advantage of a flexible procurement model which allows us to achieve those objectives in the ways which were set out in the recent manifesto.”

Labbad also repeated his offer to sit in on the council cabinet meeting next Tuesday “to confirm our commitment to the borough and answer any questions”.

If the council, which so far has spent around £2.5m on legal and commercial advice relating to the HDV, does throw it out, questions remain around how it will build the homes that would have been put up under the deal.

Haringey has suggested that like some other boroughs it could set up a wholly-owned company which would build homes for the authority’s tenants.