Plans have been submitted to demolish a 1960s office block in Glasgow and replace it with a new £75m office building.

The proposals, drawn up by Mosaic Architecture + Design on behalf of Garroch Investments, will see a new development built with ground floor retail and grade A commercial office space above.

The existing Princes House building was originally home to Lloyds Banking Group and more recently Barclays. It sits within the city’s Central Business District on the corner of Waterloo and West Campbell Street. 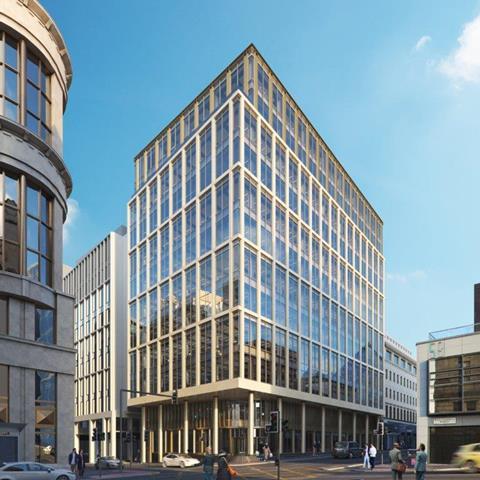 Architectural rendering of the Magnet development

Neil Hanning, director at the Scottish architect Mosaic, said the location offered the opportunity for the development – known as Mosaic – to be “a highly visible landmark” in the city.

At ground level, the building’s façade will be set back from the street at an oblique angle, forming a naturally curved entrance, while upper levels will feature east and west-facing terraces. The development will also include a range of welfare facilities, including a gym, breakout spaces, cycle storage and staff changing rooms.

Andrew White, development manager for Garroch Investments, the development would “incorporate high quality materials throughout that have longevity and will aim to achieve the highest standards of sustainable design and construction, incorporating long term plans for effective management and maintenance”.

In 2020, London tower builder Multiplex struck a deal to build a £140m office scheme in Scotland’s second city, on behalf of Osborne + Co. The project is the largest to be built in the city for a decade.