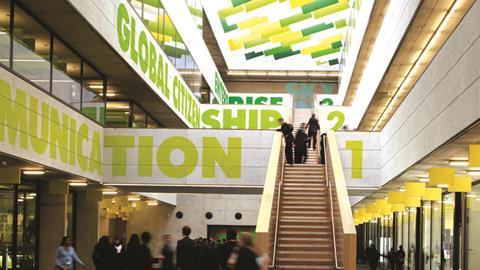 “Unbearable” temperatures which have forced staff and students to be sent home unwell from the flagship £28m Westminster Academy have been cited by the education secretary Michael Gove in his £3m legal case against the project’s lead consultant BDP.

Court documents filed at the High Court by the Department for Education also allege BDP’s “negligent breach of duty” over the building of Westminster Academy resulted in claims for delays and damages by fellow members of the construction team Galliford Try and Capita Symonds.

The department - which together with the academy itself is suing lead consultant BDP for £3m - claims that main contractor Galliford Try and project manager Capita Symonds were entitled to claim hundreds of thousands of pounds in additional fees because of a 17-week delay to the project.

While the Stirling prize-nominated school has been held up as an example of why the government should not slash spending on school design because of its impact on academic performance, the documents claim that BDP’s faulty ventilation system resulted in inadequate air flow and in summer temperatures “wholly unacceptable in a school setting”.

Despite remedial work, these issues are still to be fully resolved, the documents reveal.

“In the summer months, temperatures have exceeded 30ºC… They have resulted in numerous complaints by staff, students and parents; staff and students becoming unwell with some having to be sent home; and instances of poor/inadequate exam performances.”

The court documents also allege serious problems with cracking of the blockwork in the sports hall cracking - an issue which has limited its use since it was completed.

Summarising the dispute, the document claimed in its role as design team lead consultant, BDP had failed to exercise reasonable care and skill in the production of a design which was “capable of being costed and tendered within the initial project budget”.

“Design issues continued to hamper the delivery of the project,” it continued. “All of the tenders were returned over-budget and the construction… commenced in the absence of a fixed design.

“Once appointed, the main contractor identified problems with the adequacy and co-ordination of the design. BDP developed and released design information late and inadequately and failed to co-ordinate the design team.”

As a result and despite significant value engineering, the project went £4.4m overbudget, it is alleged. This included a £975,000 payment to Galliford Try and £86,000 owing to Capita Symonds as a result of delays and value engineering.

The court papers also reveal that BDP - which was appointed through a framework agreement and paid £2.6m for its work - claims it was underpaid and is seeking an additional £738,000 despite its client’s claim that it was overpaid by £299,000.

BDP declined to comment and has not yet filed a defence.