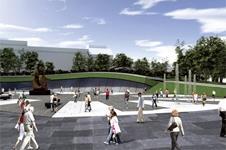 A £140 million project to build a new civic square in the heart of Aberdeen has been thrown into doubt after a public consultation revealed a majority opposed it.

The most common concern with the proposed City Square was that it was too expensive, and would concrete over green space in the centre of Aberdeen.

However the report, carried out by the Aberdeen City and Shire Economic Fourm, also concluded that the current Union Terrace Gardens in the centre of Aberdeen were “underused, inaccessible and need change.”

Wood said: “I am now less than hopeful this project can go ahead.”

The fate of the City Square project will now be decided at a meeting of Aberdeen council on 19 May.