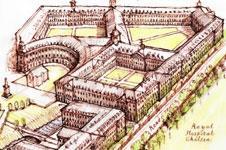 In the race to gain the public vote for the Qatari Diar Real Estate Investment Company's controversial Chelsea Barracks scheme, Quinlan Terry's design is winning out with about 60% of the 775 votes cast.

The Building magazine internet poll, which pits Richard Rogers' original design for the development against one by Quinlan Terry, follows Prince Charles' recent comment that the more traditional architect would be a better choice for the scheme.

After the first 250 votes, thought to be cast by industry professionals, Terry lagged behind with a mere 13%. However, his lead has steadily increased as more votes have been cast.

Terry's detractors have so far included Nick F, who asks: "Would the Quinlan Terry scheme have walls made from wattle and daub and have bards in ruffs playing lutes skipping down the corridors?" and Paulo, who describes it as an "over-wrought and out of scale pastiche."

Jonathan Holland, however, is a firm supporter, commenting: "In this case a classical scheme is of course more appropriate, so Terry's wins … incidentally Roger's scheme in Kinghtsbridge (another Candy) has done very little to enhance its setting. It's all very well banging on about forward thinking 21st C architecture, but how many built schemes actually live up to their expectations?

Some have rejected both designs, including Hillel Schocken who comments: "Both are rediculous. Rogers' is a yet another modernist disregard for urban space and a Corbusian placing of objects in the green and Terry's is yet another example of contamporary architects' inability to create urban architecture of our time without leaning heavily on precedents from the past. Surely, the debate is an expression of world crisis in architecture!"

To make your choice and have your say, go to the poll.