Construction at Interchange site in Solihull expected to start in 2022

HS2 has started the race to find the builder for a people mover able to ferry more than 2,000 people an hour to and from its Interchange station at Solihull.

The driver-less transit system, known as an Automated People Mover (APM), will run from the Interchange station, designed by Arup, to the NEC, Birmingham International Station and Birmingham Airport.

Firms have until 20 March to complete a questionnaire with a contract notice being published in October. No contract value has yet been given.

The APM will run along a 2.4km long viaduct, 12m off the ground, have four stops and a maintenance facility. Each carriage will be 20m in length.

The route will cross the M42 motorway, the West Coast Main Line railway and Pendigo lake at the NEC site.

A contract is expected to be awarded in spring 2022 with construction set to start that autumn. 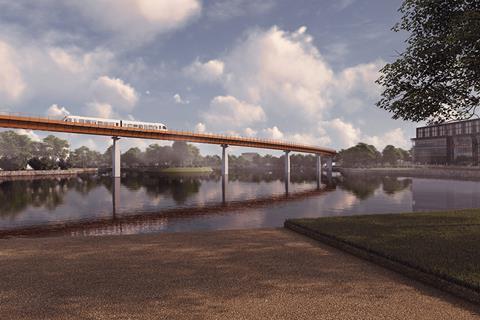 An artist’s impression of the people mover crossing Pendigo lake