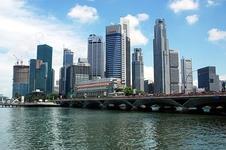 Economy shrank by 19.7% in first quarter as a result of sharp drop in exports

The economy of Singapore has experienced a record fall in 2009.

The country's economy shrank by 19.7% in the first three months of this year resulting in its largest quarterly contraction on record. Compared with the same period a year ago, official estimates showed the economy had shrunk by 11.5%.

The government is now anticipating Singapore's GDP to contract by between 6% and 9% - much higher than the previous estimate of between 2% and 5%. A sharp drop in exports as a result of the global downturn - they fell by an estimated 17% in March - has hit the country hard. Manufacturing output fell by 29% in the first three months of the year compared with the same period last year.