Sir Robert McAlpine and Robertson Construction have taken on the schemes 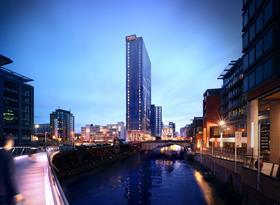 Two Manchester projects left in limbo by Carillion’s collapse are set to move forward with new contractors being appointed to complete the jobs.

Select Property Group has chosen Sir Robert McAlpine to takeover from Carillion on its two-building Affinity Living scheme (pictured), while Tameside Council has named Robertson Construction Group to carry out works on the new Advanced Skills Centre for Tameside College.

Robertson has now entered an eight-week early works agreement and has begun work to bring back subcontractors that were on the project before Carillion’s collapse.

All the Carillion employees that had worked on the project and were still looking for employment have been given roles by Robertson.

Carillion was acting as a subcontractor for the council’s infrastructure partner, Inspired Spaces Tameside.

Cllr Brenda Warrington, executive Leader of Tameside Council, said: “Getting a new sub-contractor in place has been our top council priority after Carillion went into liquidation.

“One of our main aims has been to protect the job security of hard-working staff operating on former Carillion contracts.”

Meanwhile, Sir Robert McAlpine will take on Select Property Group’s 506-home riverside scheme, which was given planning permission in July 2016.

Next to the Lowry Hotel the two buildings – named Riverside and Riverview – will rise 17 and 35 storeys respectively and house a total of 506 rentable apartments – 318 in Riverview and 188 in Riverside.

Simon Trevor, managing director for Central, Wales and the West at Sir Robert McAlpine said: “The Riverside and Riverview schemes are significant projects in Manchester and it’s a pleasure to be starting work with the Select Property Group team.”