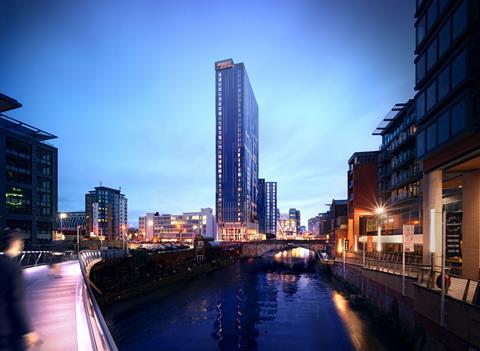 Select Property Group has secured planning permission for two new residential buildings designed by Denton Corker Marshall on the banks of the River Irwell in Manchester.

Next to the Lowry Hotel the two buildings – named Riverside and Riverview – will rise 17 and 35 storeys respectively and house a total of 506 rentable apartments – 318 in Riverview and 188 in Riverside.

The studio, one and two bedroom apartments are primarily aimed at Generation Y (baby boomers offspring) and the buildings will be operated under Select’s Affinity Living brand.

The buildings will feature large shared lounge areas also open to the public, private dining rooms, co-working spaces and a gym, while level 35 of Riverview will have a roof garden, media room and private entertainment space.

Enabling works are expected to begin in October with Riverside scheduled for completion by the end of the first quarter in 2018 and Riverview aiming for completion in the fourth quarter of 2019.

Mark Stott, chief executive of Select Property Group, said: “Affinity Living Riverside and Riverview promises to bring something exceptional to a generation of professional young renters in a highly sought after area of the city. We are delighted to have been granted planning permission and look forward to starting work on the site.”

Niall Alcock, assistant director at Deloitte Real Estate who advised Affinity Living on all three schemes said: “The proposals will deliver significant new high quality residential accommodation from a proven developer and operator and play a key role in securing the long term success of the region.