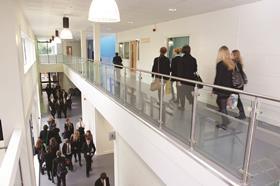 The £300m of extra capital-funded schools work announced by the Education Funding Agency today will be released to market in four geographic batches.

The Education Funding Agency has confirmed that the schools will be grouped in four batches: the West Midlands, North East, East and North West of England.

These come on top of eight capital batches already announced and in procurement.

Full details have also now been confirmed of the five PF2 funded batches announced this morning. These will be Hertfordshire, Luton and Reading (£122m); North East (£94m); North West (£93m); Yorkshire (£97m); and Midlands (£122m). These will come to market over the next year, according to the EFA.

There are 12 batches of schools being funded using capital grant. These will be delivered using the DfE’s Contractors’ Framework.

Forty-six schools in 5 batches will be rebuilt under the government’s new approach to Public Private Partnerships, known as PF2. These schools have a total funding requirement of approximately £700 million.