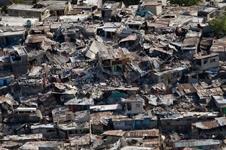 The body’s Disaster Management Commission, which has been in talks with the Haitian government, is proposing the construction of model earthquake resistant buildings and the introduction of a building code.

The RICS is requesting grant funding for the the plan from the World Bank and a number of other institutions.

Shailesh Kataria, director of the RICS commission, said: “There are hundreds of agencies that will be doing construction work after a disaster like this and most do not do it very well. Charities and governments tend not to be able to manage these things properly, therefore built environment professionals must be involved straight away.”

He said that action was urgent because in some areas of Haiti, rebuilding would already be under way. “After a disaster like this, recovery starts on day one. Some people will be rebuilding their homes already, so proper planning needs to happen now.”

Architect John McAslan, who is planning to visit Haiti to assess how his practice can help with rebuilding, agreed with the need for a code but warned that it would add between 10% and 40% to construction costs in a country with a per capita income of $1,300. He said: “Large amounts of international aid, including the cancelling of Haiti’s debt, are needed if the Haitians are to be able to implement a code.”

He said: “As soon as the emergency needs of people have been met there will be a pressing need to reconstruct homes, hospitals and schools but it is essential that we ‘build back better’, in Bill Clinton’s words.”

McAslan, who is working for aid organisation the Clinton Global Initiative, is planning to construct an exemplar building, which is likely to be a school, to demonstrate seismic design.

The news comes as several construction firms said they were ready to start work in Haiti. A spokesperson for Aecom said: “We have earmarked UK staff who have the expertise who wish to go out and help.” A Canadian employee of the firm is currently missing in Haiti.

A spokesperson for Carillion said it could send a team, but would co-ordinate its efforts with the disaster relief charity RedR.

Chris Soffe, president of Gleeds in the US, said: “If the US asked for help, then we would give it.”