RICS surveys the damage after wild party in Mayfair 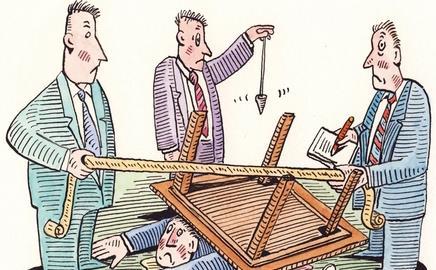 The RICS will think long and hard before it fills up 550 of its younger members with alcohol and lets them loose in a top Mayfair hotel again.

An email sent out by the RICS after the annual Matrics dinner for under 35s last month urges those responsible for £1,700 of damage to come forward.

It also warns that the London Marriott Hotel in Grovesnor Square has called in the police over the damage and a fight that broke out.

The red, white and blue-themed event on 26 April quickly got out of control and by 9pm a competition had broken out between tables to see who could throw the heaviest thing the furthest.

As porcelain salt and pepper shakers sailed through the air, some of the young men and women made up a game that involved racing to down their drinks then smashing their empty glasses on the table.

The arrival of the lemon mousse cakes was a momentary diversion but only because the attendees mixed them up to create gelatinous mess, which several young men delighted in forcing other guests’ heads into.

Clothes were then removed and underwear proudly displayed; the dance floor heaved with bodies, many in compromising clinches; tables were set alight and a fight is said to have broken out just before the police were called.

The event was then abruptly terminated and the revellers sent home.

It wasn’t the night of gentle fun hoped for by the organisers who had advertised the dinner as one of its main annual events.

The kids at the event drank too much and went a bit OTT. That’s it company executive

In one invite, a RICS organiser said: “The dinner and dance will be the biggest Matrics London has ever held and will have in attendance 564 people across 48 tables. We have a number of companies attending including, Atis Real, King Sturge, Northcroft, Davis Langdon, Cyril Sweett, Lambert Smith Hampton, Colliers, Drivers Jonas to name but a few.”

The RICS’ email describes the behaviour at the event as “disgraceful” and, listing some of the damage, notes: “A coffee table was also broken when four people decided it could take their weight, but it didn’t.”

It urges those responsible to own up to halt further police action, saying: “Coming forward could mitigate any further checking of CCTV and involvement of the police in conjunction with the hotel.”

It also asks that the money for the damage be donated by those responsible. Otherwise, it adds, cash raised by the event for LionHeart, a charity for surveyors, may have to be used.

A managing partner from one of the companies represented at the event said that although the behaviour was “very bad and inappropriate” he thought the RICS had overreacted.

He said: “It has made things so much worse as this email is now being circulated around London’s under-thirties set who find the whole thing hilarious. It’s overkill. The kids drank too much and went a bit OTT. That’s it.”

The cost of the fun and games:

For more on the Mayfair mayhem go to www.building.co.uk/blogs