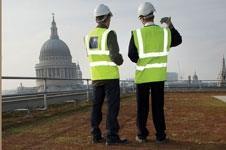 The survey of construction, mining, energy and utilities industries has revealed that growing eco-consciousness and increased regulatory scrutiny has led to a huge increase in the need for environmental experts.

The research carried out by ICM research on behalf of Royal Haskoning found that a third of all respondents were concerned about their company’s future ability to satisfy its green collar needs.

It revealed that demand for those who work in environmental-related roles or industries will increase dramatically over the next 12 months.

Two thirds of energy and construction businesses predict their company’s need for ‘such skills and services will increase in the future, and over a quarter believe their workforce would need to increase by as much as 6 to10%.

Henry Rowe, member of the Royal Haskoning board of management, said: "As a country we are steadily recognising the need for ‘green’ products, services and skills, but companies are failing to take action.

"Our research found that a third (33%) companies in the construction and energy sectors didn’t have an environmental policy in place, and of those companies, a further third (36%) admit there are no plans to implement one.

"As pressure mounts for businesses to implement ‘green’ strategies and services, the worry remains whether our current and future domestic skills market can service these demands. We need to encourage the take up of science and engineering degrees and create an environment that fosters home-grown talent in order to ensure Britain benefits, and not suffers from, the forthcoming ‘green collar’ boom."

The findings echo the views of the government, which recently outlined its framework for the future of manufacturing, with business secretary, John Hutton, claiming that one million green collar jobs could be created in low-carbon technology.

The Home Office’s migration advisory committee has also called for an overall drop in the number of skilled jobs open to non-EU migrants in the UK from one million to 700,000; engineering remains an area of shortage.

The shift in British skill requirements is already underway and will continue to grow at a rapid rate, with over a third (39%) of construction and energy companies already employing someone with ‘green collar’ responsibilities.

Of those that don’t currently employ eco-experts, nearly half believed their company soon planned to make use of green collar skills services and products, with nearly two thirds hoping to do so in the next three months.

ICM interviewed a random sample of 575 senior level professionals, of which 32 worked in the construction, mining, energy and utilities sectors, in an ad hoc online study on behalf of Royal Haskoning in August 2008. For further information on the ICM survey visit here.