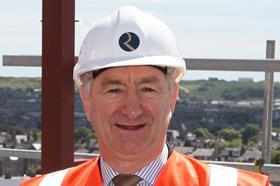 Robertson Group has shelved plans to float after concluding that would not achieve the level of interest it had hoped for in the current market.

The firm said it plans to build up long-term profitability before re-visiting the plans at a later date.

In a snapshot of the latest company results, chair Bill Robertson said there had been a change in business strategy.

He said: “It had been our intention to float the business in the near future. However, the timing of that will be determined by the achievement of long term sustainable higher profitability.”

Regarding the company’s strategy, Robertson said: “We are on year four of our five year strategic plan which would see us grow through the creation and development of regional businesses replicating our current group model but also broadening our product range.

“We also recognise the requirement to support small and medium sized enterprises in our supply chain, which has been severely damaged throughout the recession.

“To address our value and profit aspirations for the future, we can no longer be reliant on tender based opportunities, instead using a knowledge based approach to identify opportunities earlier, we expect to be able to improve the quality of opportunity and profitable outcomes through helping clients achieve better value.”