Contractor will build new whisky distillery and visitor centre for The Macallan designed by Rogers, Stirk, Harbour and Partners 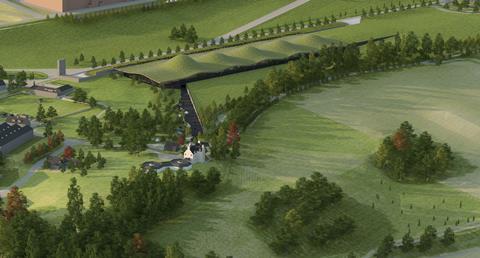 Contractor Robertson Group has won the job to build a £100m whisky distillery in Speyside.

Whisky distillery The Macallan received planning permission from The Moray Council this week for the £100m distillery and visitor centre, which has been designed by architect Rogers, Stirk, Harbour and Partners.

With a rolling roofscape, the distillery has been designed to complement the natural beauty of the surrounding area and The Macallan Estate, which overlooks the River Spey

Robertson Group, based in Stirling, has been appointed as the preferred contractor to the centre.

Work will now begin on the construction of the new facility, which is scheduled to open to the public in Spring 2017.

Bill Robertson, Robertson executive chairman, said: “As a local business we have worked in the whisky industry for many, many years and fully understand the aspirations of the sector. “Perhaps more importantly we have taken the time to understand The Macallan, the business, its objectives and its reputation for high quality in all it does.

The project will be delivered in true partnership between ourselves and The Macallan and will result in a distillery and visitor centre which will become the benchmark for others to aspire to.”

The Macallan is one of the core brands of Edrington, a leading producer and distributor of global spirits.

Graham Hutcheon, Edrington group operations director, said: The new distillery will undoubtedly become one of the most talked about distilleries, not only in Speyside but globally, and we look forward to starting on site soon.”