Consultant Arcadis has already bagged a role on the scheme 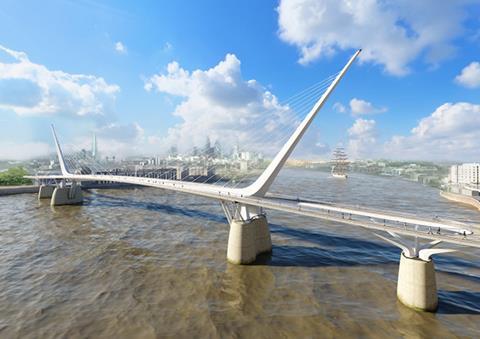 Transport for London (TfL) is aiming to go out to the market this autumn to find a contractor to design and build a new bridge over the River Thames between Canada Water and the Isle of Dogs.

Khan also revealed that consultant Arcadis has been appointed to work up the design and costing for the new pedestrian and cycle crossing.

A consultation on the preferred option for the bridge will take place in early 2018, followed by the planning application, with completion of the scheme projected for 2020 or 2021, Khan said. However, he added that “if a bidder can do it sooner, their application may be considered more favourably”.

The idea for the crossing was originally conceived in 2006 by cycling charity Sustrans, who identified a site for the bridge, and ran a feasability study and demand analysis two years later.

In 2013, reForm Architects and engineers Elliott Wood drew up a design proposal, along with costings. The firms’ proposed low-lying structure would land at Durand’s Wharf near Canada Water on the Southwark side of the river, and on a site owned by investment bank JP Morgan on the Isle of Dogs, on the Tower Hamlets side. Two independent costings priced the scheme at £88m and £100m, excluding associated infrastructure such as road junctions.

The mayor said he was aware of “an existing design which is a number of years old”, but that “there may now be innovations which are quicker, cheaper and higher quality”.

“This is a much-needed walking and cycling connection between two key opportunity areas, the Isle of Dogs and Canada Water,” he said.

The push forward with plans for the new crossing over the Thames east of Tower Bridge comes after the charity behind plans for the Heatherwick Studio-designed Garden Bridge further upriver announced yesterday that it is to be wound up. This followed Khan’s refusal to provide mayoral guarantees for the project earlier this year, after a highly critical independent review of the scheme by Dame Margaret Hodge, which effectively ended the project

Khan said he will make sure recommendations and lessons from previous procurements, including Dame Margaret Hodge’s report on the Garden Bridge, are followed.

The TfL business plan has funding to support the new crossing, Khan said, but added he wanted “third party contributions” towards the cost of the scheme.

A spokeswoman for Arcadis said the consultant was “working with TfL to develop options”.