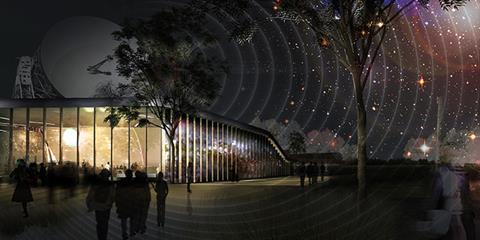 Sir Robert McAlpine has won a £16.5m job to build a headquarters for the organisation aiming to build the world’s largest radio telescope.

The Square Kilometre Array project’s (SKA) radio wave-inspired headquarters will be based at the University of Manchester’s Jodrell Bank centre which is also the home of the Lovell Telescope.

The SKA team is working up plans to build a multi radio telescope in Australia and South Africa, which if built would cover a total area of around one square kilometre.

The Hassell-designed building will provide research and office space for up to 135 people, as well as a council chamber where representatives of the inter-governmental organisation’s member states, including New Zealand, Canada and India, will convene.

The chamber will also double as an auditorium for science conferences and public lectures.

Oliver Kampshoff, lead designer on the project and principal architect at Hassell, said: The SKA headquarters is an extremely high-tech building, surrounded by farmland and so the design plays on the contrast between the cutting-edge science taking place within the building and the rural life taking place around it.”

The scheme, funded by the government, Manchester University and Cheshire East Council, is to be built by contractor Sir Robert McAlpine. It will start on site in December this year with completion expected 12 months later.

Colin Greenwood, head of administration at SKA Organisation, said: “This is an important milestone towards constructing the headquarters of the international organisation that will build and operate the SKA.”

“We now look forward to the start of construction, and of course, inauguration of this new state-of-the-art facility.”