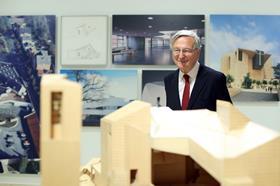 The 80-year-old Spanish architect will receive the 15 million yen prize (£102,000) and a gold medal from Prince Hitachi, younger brother of the current emperor and honorary patron of the Japan Art Association, at a ceremony in Tokyo on October 18.

The prize celebrates lifetime achievement in areas not recognised by the Nobel Prize.

His schemes have included the Madrid Atocha Railway Station (1992), the Cathedral of Our Lady of the Angels (2002) in Los Angeles and the Prado Museum Extension (2007) in Madrid.

His awards include the Pritzker Architecture Prize back in 1996 and the RIBA Royal Gold Medal seven years later.